Where does one begin when trying to convey all this living legend has done for IYH ? From the IYH Crew to the IYH fans in the chat room to the IYH fans on the message board to even IYH fans yet to come....the name FranB33 is uttered throughout the Headyverse as simply iconic. It would be foolish to even try and find the words to describe how much this man has done for IYH and how much he deserves this prestigious seat in the hall of the immortals.

We are proud to welcome FranB33 into the IYH Fan Hall of Fame Class of 2010. 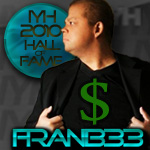